Last year’s notes ended with a cliff hanger, would I take a permanent job at Axon Vibe or would I not? Well the year began straight away with a visit to head office. Flying out to Lucerne in Switzerland on the fifth of January. This was actually my wife’s first day back in work after being off for over a year’s maternity leave. It was unfortunate to have to leave her to sort out our daughter during her first week but I did at least get a later flight so that I could help get Evie to her first morning in nursery. 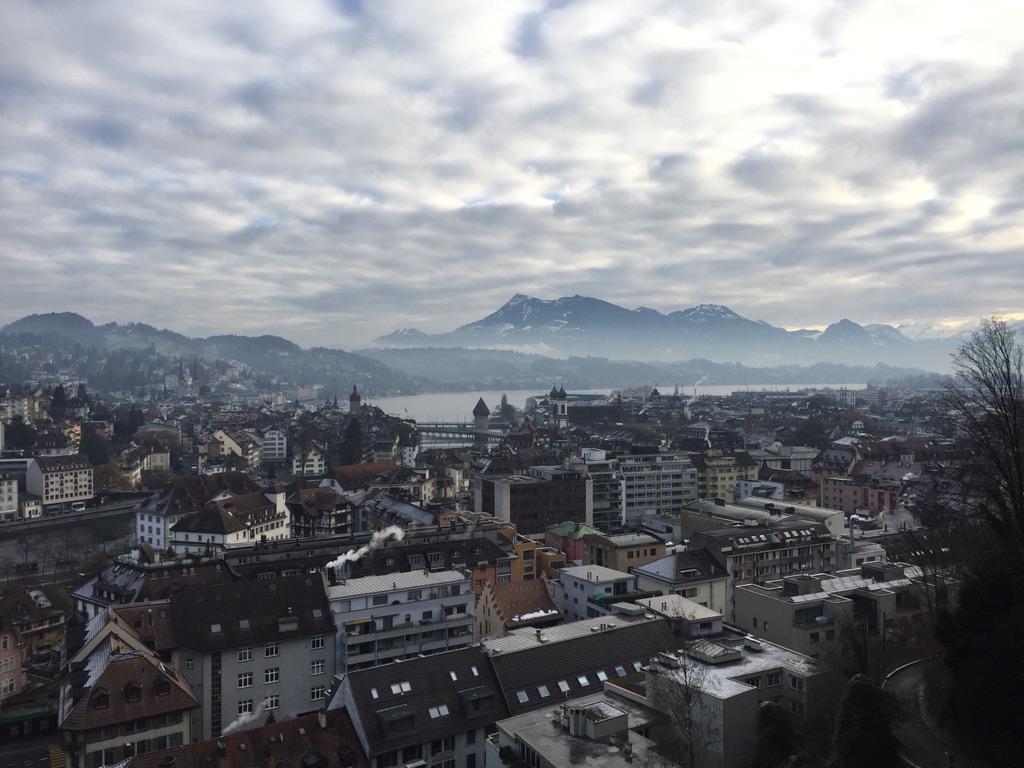 After much consideration I ultimately decided to take the job at Axon Vibe. I was intending to continue working for them so it’s not like I was looking for other clients, and the money was such that I wasn’t losing out by being a salaried worker. By this point I’d already agreed that I would have my daughter on Friday afternoons so I ultimately decide to work Monday - Thursday but to keep Friday for myself. That would allow me to keep working on my own apps or even doing small amounts of client work on Friday mornings. The view from the terrace (see above) certainly didn’t hurt either!

I wasn’t going to mention too much about what we did at Axon Vibe that year as very little of what we did then has survived. We took some time to work out what our key offering would be, sometimes focussing on business to business applications, and at others trying to develop public facing apps. One interesting thing was that we took on a number of developers and a designer who all worked from DoES Liverpool. By the end of the year we actually had 4 people all working from Liverpool. That was great to see, even if I did find it a little strange sharing an office with colleagues! We also enjoyed a great week in October when we managed to persuade colleagues from Cirencester, Norwich and Edinburgh to visit while we worked on new developments.

Way back in 2011 I’d actually taken over the running of a monthly event that would have geeks meeting up in a local bar on the last Tuesday of the month either just for a social meet-up or to hear someone talking about some technology or, well, anything that happened to interest them. GeekUp was a venerable event that started way back in December 2005 in Manchester. Over time the event became more popular and drew in people from surrounding towns, Liverpool included. I attended my first event in March 2007, gave a talk on OpenStreetMap at the following event and then was glad to attend the inaugural event in Liverpool later that month.

Running for so many years, GeekUp was such a great way for similarly minded folks in Liverpool to connect. Most of my friendships in Liverpool can be traced back to GeekUp, especially if you consider that I would never have co-founded DoES Liverpool if I hadn’t met Adrian McEwen there. While I enjoyed attending GeekUp I found I wasn’t the best at running it. It was easier when we met in a bar as if there was no talk you could easily just chat and have a drink. It’s amazing how a simple schedule of “last Tuesday of the month” and perhaps the odd “Are you going to GeekUp?” on twitter would keep the event going quite well. GeekUp ran for four years meeting in 3345 (now “The Attic”) on Parr Street. On one of the last meetings there we found the room had been double booked (I’m sure with UKIP!) and it turned out we no longer had the booking at all. As we were in the process of setting up DoES Liverpool, and we were planning to host events there, we had a single meeting in Leaf on Bold Street, before moving the event to DoES.

This change really affected the dynamic of the event, it was more difficult to get into the space and when you arrived you found a bland room of desks so it was quite different to meeting in a bar. We actually managed to continue for four more years but I struggled to get around to finding people to talk. Then in 2014 when I did manage to arrange and promote in advance a great line-up of speakers, I struggled to attract an audience! In the end I decided that life was complicated enough without the monthly stress of finding a speaker so 2015 was the year I brought the whole thing to an end. Although I don’t really get time to go out so much these days it does seem like Liverpool is missing a general geeky social meet like this now so it’s a shame there is no GeekUp, but there’s nothing saying someone couldn’t take it on again in the future!

I continued with my running this year too. Living just 4km away from DoES Liverpool it’s actually an easy and fairly short run to get into the office and I’ve tried at times to make it my primary way of commuting. I haven’t managed it often but have a few times managed to run there and back for the four days I would be in the office. No Half Marathon this year but I signed up for the Spring 10K around Sefton Park and managed to beat my personal best of around 46 minutes, I wasn’t too confident as I hadn’t done much speed training but was very happy when I blew almost 3 minutes off my record!

I tried to take up gardening as a hobby to brighten the place up. I even planted potatoes so that we’d get greenery and useful, tasty potatoes. Though at times the potatoes seemed like they were trying to take over the DoES Liverpool meeting room we didn’t really have a very prosperous harvest and it felt like the time and effort could be better placed!

.@DoESLiverpool potato update: Growing pretty well! Should be harvesting in the next few weeks #weeknotes pic.twitter.com/p1A51gXB3e

DoES Liverpool could still benefit from some more plant life but there definitely needs to be a plan for maintenance for this sort of thing! 🌻

Hm.. anything else happen in 2015? Well we made this little announcement:

Happy to announce that Evie is looking forward to being a big sister! All going well so far. #duedecember pic.twitter.com/iImTotOhFr

As we settled into our new life with work and nursery and with Evie being such a good sleeper we decided that we might actually like to have another little person around the place. Funnily enough while Evie had actually come 10 days late Ethan actually came along exactly on his due date!

I won on the premium bonds today but I think yesterday's prize was better! #itsaboy pic.twitter.com/PXOmL0KpsH

While Ethan seemed originally to be feeding okay we ended up having similar troubles with him losing too much weight and being harassed by mid-wives. After a week of problems we went along to an infant feeding clinic only to be told that Ethan had a tongue tie. A tiny piece of skin was stopping him from being able to move his tongue freely and causing him problems with feeding. Unfortunately our options were limited to waiting 2 months for an appointment in Alder Hey or trying to get it done in Chester Hospital. There was also the option of going private but we really didn’t think we should have to do that and also of the standards of care we’d receive. Being so close to Christmas we were quite concerned about whether we’d managed to get it done before the holidays so we were very happy when we got an appointment for the 23rd December. Poor Ethan ended up picking up a cold meaning the nurse almost couldn’t complete the tongue tie snip, and as it turned out had probably missed some as it really didn’t make much difference to his feeding. It seems ridiculous having to wait three weeks for something that should have been picked up and fixed while he was still in the hospital, and that the much vaunted and well-funded Alder Hey couldn’t do anything about it for months. Obviously we can’t be sure that dealing with it straight away would have reduced the problems, but it would have given Ethan a much better chance and given my poor stressed wife one less thing to worry about!

I feel I should finish on a lighter note though so let’s back-track to October, we’d been invited to a Halloween party and I couldn’t think of what to go as. My wife spotted a Jack Skellington costume in the shop and came up with the great idea of combining it with one of my old Santa Dash costumes, resulting in this great result:

Bit of recycling went on for my Halloween costume pic.twitter.com/bPsG6YcrY0