I gave a talk last night at Social Media Cafe about OpenStreetMap. I actually haven’t been too involved in the OSM community of late so it was nice to get back into it a little bit. It was also good to find that a large portion of the audience was not already aware of OSM so it was nice to introduce it to people.

You can find the video of Social Media Cafe on USTREAM. The video will be chopped up soon at which point I’ll link to or embed my own talk here too.

I ended up with 63 slides taking up about 100MB so I’m going to try not uploading it to Slideshare this time, instead I’m going to summarise the talk here. 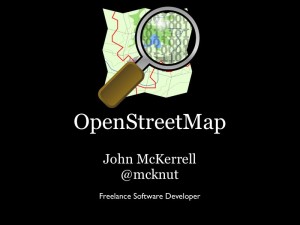 Why do we need OpenStreetMap?

…which we give away 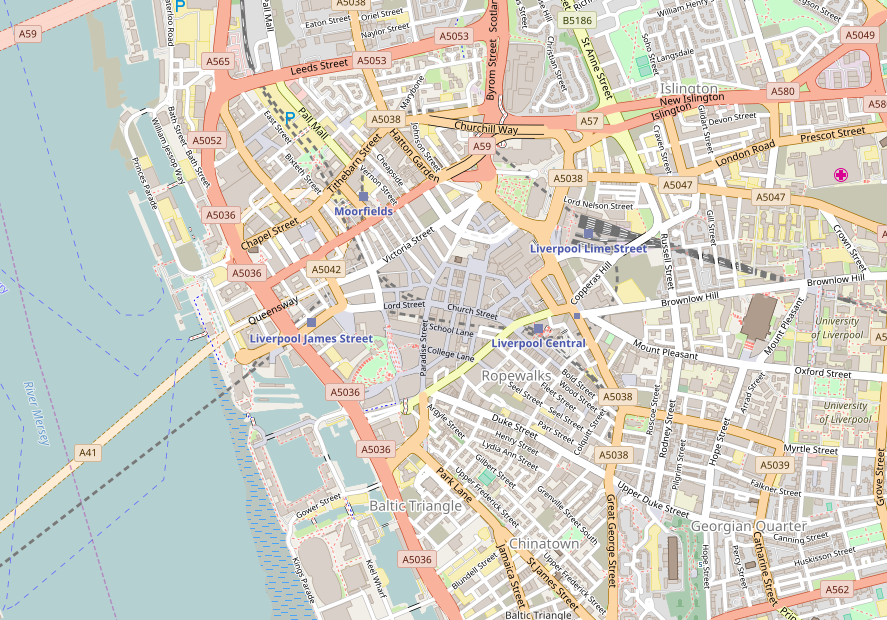 It’s not just Liverpool, or even the UK, in the talk I showed maps of the Hague, Washington, DC and Berlin. You can pan and zoom the map linked to above to browse the coverage.

“It’s absolutely possible for a bunch of smart guys with the technology we have today to capture street networks, and potentially the major roads of the UK and minor roads”

“If you don’t make [lower-resolution mapping data] publicly available, there will be people with their cars and GPS devices, driving around with their laptops .. They will be cataloguing every lane, and enjoying it, driving 4×4s behind your farm at the dead of night. There will, if necessary, be a grass-roots remapping.”

“You could have a community capability where you took the GPS data of people driving around and started to see, oh, there’s a new road that we don’t have, a new route .. And so that data eventually should just come from the community with the right software infrastructure.”

Some big names in technology who clearly think user-generated mapping data is a good idea.

A lot of people ask the question “Why do we need OpenStreetMap when Google Maps is free?” 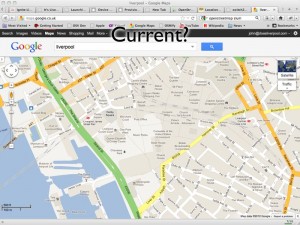 This picture shows a Google Map screenshot that I took on 16th February 2012. In the centre of the map you can see the Moat House Hotel. This was bulldozed in 2005 but still shows up on Google’s map. You’ll also see the Consulate of the United States in Liverpool. This was also closed down some time ago. So you can see that Google Maps isn’t perfectly current (and, for the record, I have now reported these problems to Google).

Google have launched their own project to map the planet. Map Maker allows people in many countries to edit the data of the map, adding roads and POIs in a similar way to OSM. Unfortunately Google doesn’t then provide full access to this data back to the people who have made it! Map tiles are generated and shapes of the data entered can be retrieved but the full detail of the data is kept by Google. The license offered by Google also restricts its use to non-commercial usage, stopping people who have put effort into creating the data from being able to derive an income from it.

Though Google’s mapping API is free to use initially they have recently introduced usage limits. Though they claim that this will only affect 0.35% of their customers, it has already affected a number of popular websites that simply can’t afford to pay what Google is requesting. Some examples will be given of these later.

It would be unfair to talk about the bad parts of Google without mentioning the good. Google has regularly supported OSM through donations, sponsorship of mapping parties and support through their “Summer of Code” programme.

As do other providers

It also wouldn’t be fair to paint Google as the only supporter, for example:

Or, Map as Party (Mapping Parties!)

The first mapping party was in the Isle of Wight. At the time the only “free” map data available was an Ordnance Survey map that had gone out of copyright: 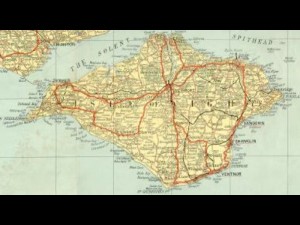 A group of people went to the island for a weekend and collected GPS traces of all the roads: 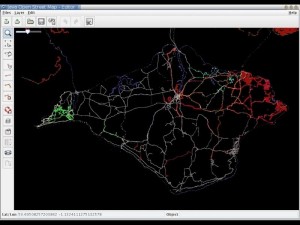 And from these made a great looking map:

We also held a mapping party in Liverpool in November 2007 which allowed us to essentially complete the map of the centre of Liverpool.

That video shows the traces of everyone involved with the mapping party as they went around Liverpool and mapped the streets. It was built using the scripts referenced on this wiki page

Visit openstreetmap.org and sign up for an account. If you have GPS traces, upload them, don’t worry if you don’t as you’ll be able to help by editing existing data or tracing over aerial imagery.

An online flash editor is available (Potlatch) simply by clicking the “Edit” link when looking at any map on OSM. An offline editing desktop app built in Java is also available, JOSM

There are hundreds of tags that you can use to describe almost any data, use the wiki to find more information especially the Map Features page.

This license lets anyone use the OSM maps for free so long as you mention that the source was OpenStreetMap and you share what you produce under a similar license.

Very soon the license will change from CC-BY-SA to Open Database License which offers similar freedoms with more suitable legal terminology. Do read into it if you think it will affect you.

Nestoria, a popular property website, has long supported OSM. A few years ago they made use of OSM data by using the maps generated from the Isle of Wight mapping party to replace the non-existent data in Google Maps. More recently they have been affected by Google’s plans to charge for its map data and so they have switched fully to OpenStreetMap data and maps.

CycleStreets is a great website for finding cycle routes. They offer a directions engine that gives detailed descriptions of routes, allowing you to pick between Balanced, Fastest and Shortest routes. They also offer lots more information and a database of photos to give more insight into a journey. The routes they recommend are ideal for keeping cyclists off the busy dangerous roads and onto the quieter safer more direct routes.

mapme.at is a website that I have built for tracking people’s location. People use it to track places that they visit and journeys that they take. I use it to track everywhere I ever go. Adrian McEwen wrote a script that puts the location of the Mersey Ferries into mapme.at and that’s what you can see in the map above.

A few years ago I worked with ITO World to create some animations of my data. They created great animations which you can find on my vimeo account but below is one showing every journey I took in January 2010 with each day being played concurrently.

All travels in January 2010 run at once. from John McKerrell on Vimeo.

Geocaching is a popular pastime based around GPSes, treasure hunting and maps. Their website used Google Maps and they also had issues when Google started to charge. As a result they have switched to OpenStreetMap too.

Not being a regular user of Android I can’t recommend any apps personally but there is a large list of OSM Android apps on the wiki and I’ve selected the following based on features they claim to offer.

gopens and MapDroyd both allow you to browse OpenStreetMap maps on the go and claim to offer offline support, allowing you to view maps even when you’re not connected to the internet.

Skobbler Navigation provides a full Tom-Tom style satnav for navigating on the go, all based on OpenStreetMap data.

Mapzen POI Collector is a handy way to collect POI data while out and about, or to edit existing data.

Skobbler Navigation is also available for iPhone, again providing a full Tom-Tom style satnav for navigating on the go, all based on OpenStreetMap data.

NavFree is another full satnav app based on OpenStreetMap data.

Offmaps is an OSM map viewer that allows you to download large chunks of map tiles in advance so that you have them, for instance, when you go on holiday. I would recommend the original Offmaps over Offmaps2 as I believe the latter restricts the data you can access.

Mapzen POI Collector again is available for iPhone and is a handy way to collect POI data while out and about, or to edit existing data.

OpenStreetMap has been heavily involved in Humanitarian efforts, these have resulted in the formation of HOT - the Humanitarian OpenStreetMap Team. Projects have included mapping the Gaza Strip and Map Kibera a project to map the Kibera slum in Nairobi, Kenya. These projects have many benefits to the communities involved. Simply having map data helps the visibilities of important landmarks: water stations, Internet cafes, etc. Teaching the locals how to create the maps teaches valuable technical skills. Some people build on the data to provide commercial services to their neighbours, building businesses to support themselves and their families.

A hugely influential demonstration of the impact of OpenStreetMap involvement in humanitarian efforts occurred after the massive earthquake that struck Haiti in 2010. Very shortly after the earthquake hit, the OSM community realised that the lack of geodata in what was essentially a third world country, would cause massive problems with aid workers going in to help after the earthquake. The community responded by tracing the aerial imagery that was already available to start to improve the data and later efforts included getting newer imagery, getting Haitian ex-pats to help with naming features and working with the aid agencies to add their data to the map. You can see some of the effects of these efforts from the video below that shows the edits that occurred in Haiti around the time of the earthquake.

If all of this has piqued your interest then visit openstreetmap.org to take a look at the map, sign up and get involved in editing. Find more information on the wiki at wiki.openstreetmap.org or find out how you can switch your website to OpenStreetMap at Switch2OSM.org

[...] available for free from the app store) gave an excellent talk aboutÂ Open Street MapÂ - and has written an excellent blog post which includes his slides along with some video. So take a [...]

Excellent read and initiative. I have a question though, you mention 'mapping parties' (sounds like fun!) in Liverpool and IOW using GPS. How is this done exactly? Do you dish out handheld devices or can ones smartphone extract the gps coordinates you need to create the outlines on the map?