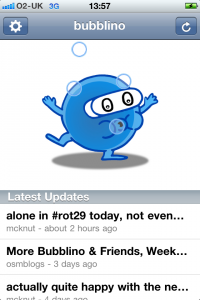 Quite a mixed week this week as I was expecting some materials from a client to come through to let me work on some updates for them but they didn’t come through until Friday. In theory it was also a short week due to the May Day bank holiday in the UK. As it happened I ended up spending Monday making some final changes to Bubblino, including the addition of bubbles! Such an important thing for Bubblino but I kept forgetting to add them. Really happy with how they came out, they’re randomly generated and individually controlled. At the moment the bubbles all float up which is a bit different to the real Bubblino, but they look good for now. I finally got the app submitted early on Tuesday morning so hopefully it’ll get accepted in the next few days and we can get it up for sale. The new version is going to be on sale for 99c/59p so it’ll be interesting to see if it generates any useful revenue.

I also spent some time this week trying to improve my App Store Positions service. I’ve noticed recently that the graphs it generates of positions have been fluctuating quite wildly. I’d previously checked that it was successfully completing all the downloads it does so I couldn’t really see what might be the issue and was assuming it was a problem on Apple’s end. As it turns out the problem is definitely on Apple’s end but I have been able to work around it. Basically Apple’s servers are sometimes returning the wrong result for the request I send, i.e. I might request UK Navigation Paid apps and get Venezuelan Navigation Paid apps back. While I would notice a response coming back with incorrect XML because it didn’t have positions data in, I wasn’t checking that what I got back was what I asked for. Fortunately I’ve been able to add a check in and am now retrying all requests that get bad responses. Unfortunately this means that my downloading is now taking about 1 hour 15 minutes when previously it was only taking 30 minutes, but at least I’m getting the right data now! I also improved the style of the emails it sends so that high performing apps are towards the top and the highest app store rankings show up first so I’m glad to be getting some nicer data to present there. 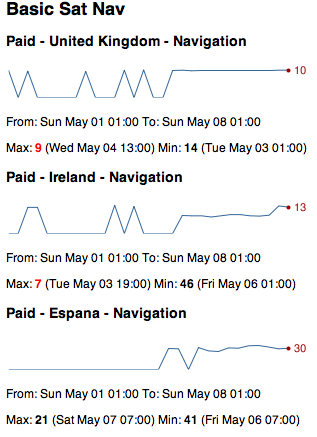 Apart from this most of the week was spent on little bitty things, some (hopefully final) changes to the Chess Viewer and answering various emails. Next week should be more active working on a client app, though that hasn’t started well as I’ve found that the image resources I’ve been sent through are all arbitrarily sized. I’m sure I’ve got a fun week to look forward to.