I’ve been spending a few days this week trying to get my Examstutor.com apps working on Android. I had already decided to do this using HTML and spent the past two weeks creating a “HTML5” version of the app. I was surprised but pleased about how quickly I managed to complete this, partly due to it always being easier doing something the second time. This HTML5 version uses localStorage a lot to store the test modules and various other bits of data. It’s probably not something that I would actually release as currently it stores too much data in localStorage, but I built it in such a way that I can build plug-ins that work on different devices meaning that I only need to recreate the device specific code for storing and retrieving data and the rest of the code that handles the interface should be the same.

Once I got the HTML5 version done I had to begin on the Android app. The app is very basic with a WebView (a WebKit control) taking up the whole screen. I then load the HTML5 app inside there and leave it do the rest. To provide the device specific code I’ve created a Java class with methods that match the plugin interface. I then add an instance of that class to the WebView using addJavascriptInterface. In theory I thought that would be all I’d need to do to get it working, due to a few idiosyncrasies of addJavascriptInterface that wasn’t the case, as I’ll explain in the following few paragraphs.

The first issue I found was that the object that is exposed in the JavaScript appears not to act like a normal JavaScript object. The way I had my code arranged there was a global singleton ExamsTutor object and then the plugin would be another singleton called ExamsTutorDevicePlugin. To save having to decide which object’s methods to call, ExamsTutor would copy all the functions from the plugin into itself, as follows:

In that example I’ve already assigned ExamsTutorDevicePlugin to device and obj is going to be the ExamsTutor singleton.

After that code I would expect a call like ExamsTutor.someDeviceSpecificMethod to work. Unfortunately I found it wasn’t and when I added some logging statements it turned out that the code was never going into the loop. In the end I decided to add a JavaScript singleton that would wrap the Android object, a little annoying that I need to do this but as you’ll see it ended up being useful later, here’s a snippet from that class:

The next issue was the types that could be sent to and returned from the android interface. In my plugin interface I had already arranged to send various JavaScript Objects and Arrays in and out of the functions. After some testing I found that addJavascriptInterface only allows basic data types such as boolean, int and String. Fortunately this is simple enough to fix. I’m already using jQuery inside my web app and have the JSON plugin so I can use $.parseJSON and $.toJSON to make sure that I only pass strings to and from the Java. I was worried that this would result in me having to do lots of packing and unpacking on both sides of the interface but actually on the Java side I will generally just be storing the JSON to files so it shouldn’t be much of an issue. Another snippet from my JavaScript singleton with this in place would be:

You might notice in that snippet that I’ve used parseJSON rather than $.parseJSON. This was due to the final issue I’m going to describe here. For some reason the string objects returned by the Android interface don’t seem to react to the typeof operator in the way I might expect, and in the way jQuery’s parseJSON method was expecting. The first thing that $.parseJSON does before parsing is some sanity checking to make sure it has a string:

For some reason, calling typeof on the strings returned by Android was giving "object" and so this check was failing and jQuery was giving up on the parse. Fortunately this was simple enough to handle. I added a local parseJSON method to coerce the json to a string and also to handle the exception that might be fired by jQuery:

With that I managed to get the app to the point where I can select a Revision Pathway and have it download the information for that pathway and download the test modules from the Internet. There’s still plenty more to be done but as you’ll see from the screenshots it’s not looking bad already. 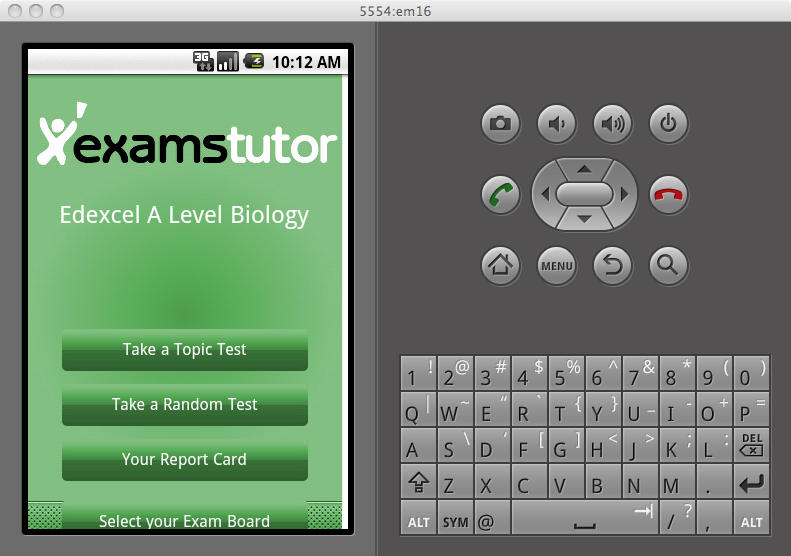 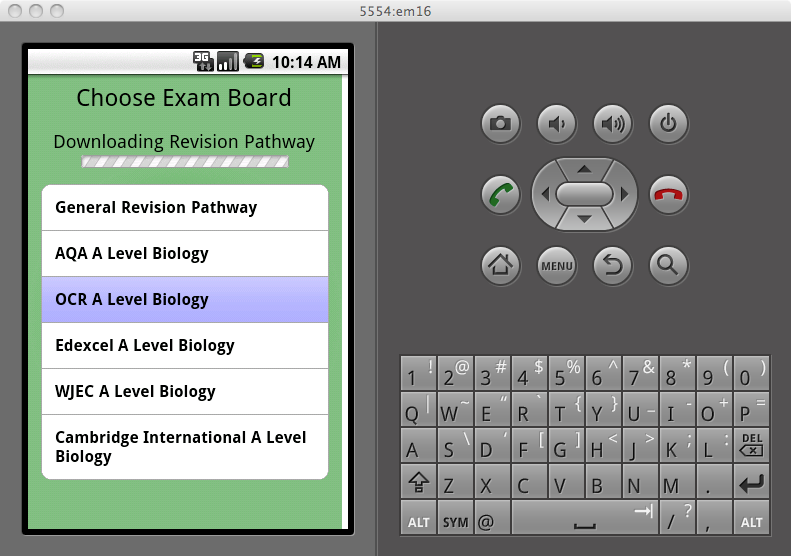