So these weeknotes are rapidly, or rather slowly, becoming “monthnotes”. The past few weeks have seen a few interesting things happen though so I thought I’d get another post up. Last week saw the completion of version 1.0 of the Examstutor iPhone apps. We managed to get the content for all of the 9 subjects we were hoping to support finished and so submitted 18 apps! We’re now just waiting to see what Apple will say, hopefully they’ll go straight through without any rejections but you can never be too sure. We’re submitting two apps per subject. One is quite simply a paid-for app, you pay your money and you get access to hundreds of questions on your subject. The other will be a free app in the store but is intended to be used by schools and colleges (and, in fact, individuals) who have signed up with examstutor.com for use of their online and mobile service. On downloading the free app they will be prompted for a username and password, when they enter this they will get full access to all the content “free”. We’ve included a few tests (generally around 20 questions) for people to use on the free app though so that if they download it by accident they still get to try it out and can then decide to upgrade if they want.

Last week I also managed to get the final few issues sorted out with my chess app, it’s looking better and hopefully I’ll be able to submit to the store pretty soon.

I also got most of the work done adding features to the Ruby on Rails site I mentioned in my last blog post. I needed to generate PDF invoices for a selection of addresses and services in the database and managed to get the work done pretty quickly. This was the whole point of converting from the awful PHP to a new codebase but I was still surprised by how quickly I got it done. I mainly need to make some changes to the PDF document to better match what the client wants and then let them try the system out and see what they think. I’ve used Prawn for the PDF generation and have been quite happy with it finding it pretty easy to use.

Final thing to mention is my location clock that has been quite popular on this blog previously. I originally built it at Howduino Liverpool in May 2009 - around 18 months ago. It has sat around with barely any updates since then and so was still made up of a big messy bundle of wires. 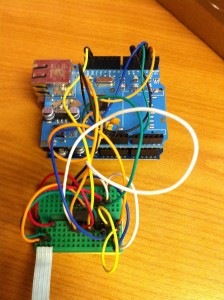 With the second Liverpool Howduino event coming up I decided I really had to get around to soldering this up, and I wanted to get it done before the event so that I could play with something else on the day (Xbee modules, lasers and a second four handed clock powered by servos were all on my list). Leaving it to the last minute I finally got started on building a circuit board on Thursday and did manage to get it finished off on Friday. Unfortunately I had a few issues with it, various connections connected that shouldn’t have been, and others that should have been were not. I then found that for some reason the software that had been working fine before had stopped working too. Fortunately I finally managed to get it all working on Saturday so now have a fully working circuit board and software. 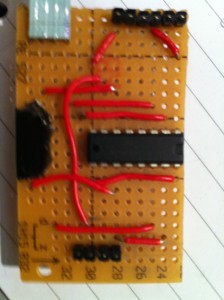 So why am I not happy now? When I came into the office this morning I picked up the clock and started looking to see if I could get a chime to fit in the casing and where would be best to fit the arduino and cut holes for the ethernet, USB and power ports. I brushed past the motor and it wobbled, I thought “hmm, that seemed loose…. OMG, THAT’S LOOSE!!” After something like a year of being firmly stuck on by Araldite the stepper motor has now detached itself from the mechanism so my clock is still not working. I’m going to go out at lunchtime and see what glue I can find that might be able to stick a metal motor onto a brass mechanism, or possibly try to think of an alternative!

I've got some thermal adhesive that I can recommend - got it from RS Components. Think it was: "Thermal bonding epoxy adhesive": Not sure if this link will come out, but this looks like the one I got: http://uk.rs-online.com/web/search/searchBrowseAction.html?method=getProduct&R=1558320 It's held several LEDs in place hanging upside down attached to copper heatsinks for several years now... had to use a hammer + screwdriver to break one set apart once. Feel free to borrow mine if your in town...