Just a quick one so that I’m not missing a week out. Last week I finally started developing the new iPhone revision apps. Development went well and progressed really quickly. 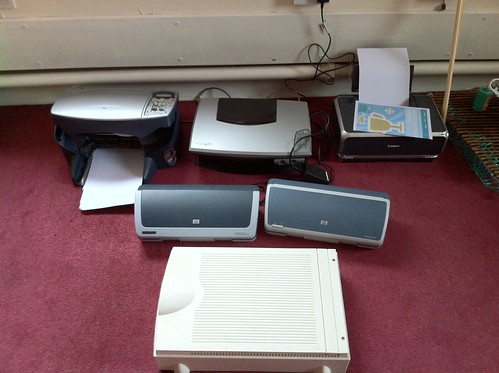 I also started planning for Howduino which is going to be returning to Liverpool (at long last!) on the 20th and 21st November. Howduino is a hardware hacking event inspired by the Arduino platform but encapsulating many other aspects of hardware hacking and “Internet of Things”.

I have a few ideas for what I want to work on, I’d like to do a new more capable version of my clock - ideally with more hands that are individually controllable. I’m also hoping to have a look at building a laser projector. Potentially for both ideas I’m going to need stepper motors so I put a request out on Freecycle/Freegle Liverpool requesting “broken printers”. I ended up getting 5 in the end. “Unfortunately” two of them seem to work fine so we’ve adopted them as office printers but the others will be taken apart for parts, I also managed to find an old SCSI scanner of my own to disassemble too as you can see in the photo above!