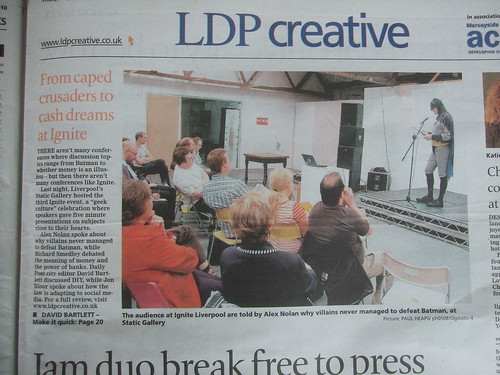 Not quite so stressful a week this week though it did have its moments. I spent Monday morning catching up on some much delayed tasks. Nothing particularly interesting just bits and pieces like polishing off the print styles for case studies on the Marketing PRojects website and adding a blog feed to the homepage.

A new bug was reported on the music iPhone app though which caused some consternation. The app allows you to log into a site and download the information about music that you’ve previously bought. It seemed though that for some users it would display nothing even though the information was being downloaded. It didn’t take me too long to track it down to something relating to an SQLite database I was using. I would parse the reponse from the server and then add all the information to the database. I would then close the database in one function and then reopen it in another function and read it back in. For some reason though when I tried to read the information back in it was finding no rows in the database. The bug seemed only to occur on iPhone OS 3 and only for certain users. In the end I couldn’t track down the actual cause and had to just save the information to the database but then ignore the database and just use the information from memory. It’s obviously a more efficient way of doing things, there’s not really much point reading the information back from the database when you already have it in memory. I guess I was doing it that way to make sure that I always read the current data from the database to make sure it was always in the same format. Now the database is only used when you first load the app and everything works nicely. Annoyingly though I wasted a day trying to sort that out.

I also worked on adding some features to a property management database that I wrote last year for The Restaurant Group. This is a site built using the Zend Framework to give a fairly lightweight API onto a database and then a rich JavaScript interface built with JQuery and the Multimap API. Most of the features were fairly simple and were sorted within a day. The most troublesome one though was to add the ability to log into the system by entering a username and password from a Microsoft Active Directory system. I managed to get the authentication step working without too much difficulty using the Zend LDAP Authentication class but I also needed to check the groups that the user was in to determine whether they were allowed to make changes to the system or were only allowed to view the information. After a few hours of getting nowhere we eventually decided to try using an alternative library. adLDAP is an LDAP wrapping library specifically tailored to accessing Active Directory systems. I used this and again managed to get the authentication working easily but the groups still caused some issues. In the end we found that the AD system I was testing against was set up in a non-standard way. After a few tests against the real live system we found that the library was working fine and I eventually managed to get it all working.

I also managed to spend a little time on the chess app, didn’t make too much progress but I’ve managed to get the full moves view to slide in from the side and slide out again when you’ve selected a new move to go to (or clicked the “X” in the corner).

The final thing that caused issues this week was the mapme.at server. On Thursday morning I decided to upgrade the kernel as ubuntu was telling me there was a new one available with some security fixes. The upgrade went fine and I carefully made sure that all the services were running and that nothing had been broken by the upgrade. A few hours later I just happened to go to the site only to find I was getting errors. I logged in to try to track down what was happening, at first this was difficult because oddly I was getting no errors in the log file. It was only when I realised that the filesystem had mounted itself as read only that I realised something fairly major was wrong. This has happened once before and at the time I just rebooted the system and it came back fine, I rebooted now though and it didn’t come back. I was hoping it was doing a disk check so I left it for a few minutes before eventually requesting console access from my hosting provider hetzner.de. When that came through I found the system was complaining that it couldn’t find the superblock, or the disk or something along those lines which was when I realised something was quite wrong. I put in a support request for them to take a look and waited for them to get back to me. After an hour or so of no response I sent them another email, two and a half hours after the original request I was told it was just a filesystem error and that they had booted into the rescue system to run a disk check. After over 12 hours of waiting for more information I emailed them again to be told that the disk check was waiting for input and that I should just run it myself, so it had essentially been doing nothing for all that time! I logged into the rescue system and ran the check myself. It took nearly two hours but finally after that I got the machine back up and running. I realise now that I should really have been able to handle most of the “repair” myself but I’m still very disappointed with Hetzner’s feedback. Taking hours to give any response and then failing to anticipate that the disk check would need user input (“fsck -y” would have fixed this) are pretty crap. At least now I’m more prepared if anything similar happens in the future. Not only am I more confident about how to fix the problem (though I’m still not 100% sure how to get into the “rescue system”) but I’ve now also invested in the services of Pingdom. When mapme.at went down it actually took me a few hours to notice but now that I have Pingdom set up it should alert me ASAP if there’s any further problems.

To end on a positive note, I went to the third Ignite Liverpool on Thursday night. We had another really fun night with talk subjects ranging from cows to cannibilism, and had Batman talking about using the “Systems Failures Approach” to analyse why his arch enemies were so unsuccessful (see photo above). Social events in Liverpool are just getting better and better these days. At the end of this month we’ve got the second Social Media Cafe Liverpool and Jelly Liverpool to look forward to (both on the open labs calendar). There’s also How? Why? DIY! which is not, as it may sound, going to consist of a Sunday afternoon putting up shelves but will offer a day of interesting sessions aimed at helping people use the full potential of the technology, community and social media facilities available to them. Take a look at the link for that one as there’s some interesting sessions planned and I’ll be going along to try to get people interested in mapping too!