So a very busy week as I had various projects to try to finish off and plenty to do to prepare for my State of the Map talk. Also kittens! 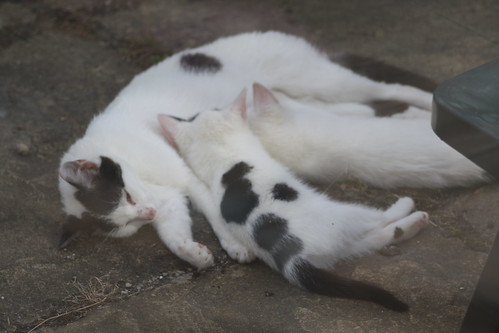 It might seem a bit odd to mention kittens on a blog post about my work week. It’s actually quite sensible though, these fluffy critters took up a sizable amount of time in my week!

But apart from that. Most of my time last week was spent trying to tie up loose ends and get the iPhone apps I’ve been doing ready for testing. I discussed the changes in functionality needed for one of the apps and the client has agreed to pay for some more of my time to get those bits added, so that’s great. I spent some time getting the most important changes done but will do most of that extra work this week and will hopefully get that app finished soon.

The smaller app that I was waiting for sign-off on I finished on Monday and sent that off to Testing first thing Tuesday. I was quite happy with it and felt it was working well. I heard from the client on Friday but haven’t yet had time to look at how many bugs they’ve found, hopefully not too many!

I began some work on new functionality for mapme.at to allow users to consolidate their favourites. Part of this work is to allow user’s to take their old favourites and merge them with places that mapme.at has found in the OSM database. The other part is to allow users to manually match OSM places on to Foursquare venues that perhaps have slightly different names or for other reasons the automated matching hasn’t been able to manage. I was hoping to have this ready by the time of State of the Map so I could announce this great effort to come up with a repository of ID mappings but unfortunately with kittens and finishing client work I didn’t manage it. In fact I didn’t even manage to finish my presentation until I was on the train to Girona and finally had an hour to sit in front of my laptop with no distractions and no interruptions. My talk on Friday seemed to be well received. People were interested in some of the applications and uses of the site and there was definite interest in the ID mapping data that I explained would be available in the future.

I described the site as a “Social Location Experimentation Platform”. I had come up with this term a few days previous, I think trying to channel some of the excitement that BERG find with their name (based on British Experimental Rocketry Group). Though I came up with it after the description I think my explanation was valid. I pointed out that the mapme.at platform allows experimentation not just by developers who can come up with some interesting and fun apps (like Adrian McEwen’s ferry trackers or my “Weasley” clock) but also by users who are able to experiment with mapme.at and with other location tracking applications like Foursquare and Google Latitude and can do it knowing that even if they only play with a service for a week and then stop using it, they won’t have wasted that week of data collection because mapme.at will do the job of storing up all their history in one place that they can access at any time and from any other compatible service.

If you’re interested in reading through my talk you can find the slides here.

As I spent most of yesterday travelling I now have a very short week this week (and hence this blog post being very late). I’m probably also going to the Hacks and Hackers event on Friday which will also restrict the time I have to spend on client work. Hopefully there’ll be less interruptions from kittens too (though this blog post has already been interrupted by them once!) On that note I better get started, see you next week!