I was invited to attend a private “hack day” at the offices of the Ordnance Survey on Friday last week for the launch of their new OpenSpace API. A number of other people from the Open Street Map community were also invited (leading to talk of attempts to extinguish the OSM project by doing away with us all!) 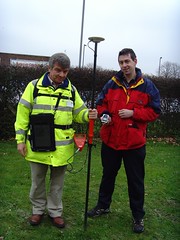 In actuality the guys at the OS were really friendly and had a day of activity planned for us. After the initial introductions we were split into two groups and went off for a mini-tour of how they collect their map data. My group first got to head outside and talk to one of the few hundred on-the-ground surveyors that the OS have. He showed us his collection of equipment, from the low-tech popeye to the 2 metre GPS mast, back-pack full of GPS equipment and the tablet PC for entering new data directly. It was really interesting to listen to his experiences of surveying and to compare it to my own. I’m not sure that he realised that most of those present would consider themselves to be “surveyors”, I’m sure he’d laugh if he heard it though considering the accuracy and quantity of the data that he would collect in an area would be far more than that taken by most OSM mappers.

After this we were taken off to the Photogrammetry department to find out about how OS are using aerial imagery for mapping. OS run two planes, one flying with a traditional film camera and one with a digital camera, to collect their own imagery of the country. They make sure that the imagery they collect overlaps and then use all sorts of advanced processes to convert this into a 3D model - processes such as wearing funny glasses while staring at a screen and clicking the imagery when features overlap. We saw some incredibly detailed imagery - yes, better than google maps - but unfortunately I didn’t get to see their imagery over my house and find my car.

After this mini-tour we were then given a longer introduction to the OpenSpace project itself, their reasons for launching it (a combination of “we want to” and “we had to”) and the terms and conditions of use, which unfortunately turned into an hour long discussion that nearly scuppered lunch! The terms that OS are using have various provisions for deriving data from the maps (which suggested a npemap.org.uk type postcode collector might be allowed) but also don’t allow for commercial usage. After we did finally have lunch we all signed up for the API and started hacking. Here’s what I ended up with, a low resolution plot of my route from London to Southampton:

The API itself is built on top of the existing OpenLayers API. I think this was a really good decision by the OpenSpace team as the world really doesn’t need yet another JS slippy map implementation, and to have a large company developing with OpenLayers, can only help to improve that project. Rather than going with a WGS84 based system though, OpenSpace centres around the use of BNG (British National Grid). Though in theory this is an obvious choice for OS, considering that BNG is “their” system and is the system in which all of their raster based mapping is available (I think), the fact that they require coordinates to be entered using BNG by default is definitely going to lower the number of people that bother to use it.

Though a conversion system is provided by the API, I was interested to find that they are using the algorithmic method to convert BNG eastings and northings to WGS84 latitudes and longitudes, rather than the full National Grid Transformation OSTN02. I’ve never been too sure of the difference in accuracy between these and looking at the page on wikipedia about BNG I find it’s about 7m accuracy for the Helmert datum transformation which I assume they’re using. I guess that’s fine in most cases but Multimap does have a free web service available for doing the more accurate translation, get in touch with me if you want more information :-)

When trying to put together the small implementation you can see above I also came across a few problems that also seemed to arise from the use of BNG. To give you a quick pseudocode run-down, my app basically does the following:

I came across a number of problems when I tried passing my converted points into the OpenLayers.Bounds object and an array of the points into my vector. After playing around with it for a while I’d managed to get my markers to display, but not the vector, and the map wasn’t properly autoscaled to my journey. After looking at the vector example though I noticed that they were passing OpenLayers.Geometry.Point objects into the vector, and OpenSpace.MapPoint objects into the setCenter method. This is quite possibly a problem with OpenLayers rather than with the OpenSpace implementation, though I can’t be sure either way. After a little playing around though I found that adding the following line of code, then using the point variable with the bounds and vector objects fixed my problems:

So, conclusions: I have to say that I don’t think that this API is ever going to change the world. There are so many mapping APIs out there that are freely available anyway that this one is just not going to have that effect (especially with Multimap offering the same landranger 1:50k data, in a WGS84 environment). That said though, I can see definite uses for it in the UK, and I know that many UK based organisations will be happy to use the BNG system. It also means that Ordnance Survey are going to be meeting their mandate to promote the use of their data and noone can say anymore that there’s no way to get access to Ordnance Survey data free of charge (or at least when the API is available outside the current closed release anyway). There may be lots of restrictions on use at the moment, but at least it’s something and hopefully this small step will lead onto a lot more open-ness at the OS. Also I definitely don’t want to put down the guys that have been working on this, what they’ve achieved is great, they just need to keep working on it, and working on the people above them to allow more data and more freedom of use for the data.

All very interesting, thanks for the writeup. You mention a OSTN02 webservice, I would be interested in that :) Its something I keep meaning to try out but never quite got round to it, settling for the Helmert transformation.

[...] to show you what else is going on and judge coolness on things such as Ordnance Survey’s new OpenSpace. What do you [...]

@Barry - Sorry for the delay, the web service is very new (it was basically written for use on the new yell.com) so there's no documentation. I'll get in touch as soon as it's available. One thing to note, it's actually OSTN97, not OSTN02, but the former should still be more accurate than Helmert transformations.

@Barry - So slightly delayed but we enabled this for all our Open API developers a few weeks ago. Richard's blog has more info on converting OSNG using Multimap API</a>.